Small cell lung cancer is a disease in which malignant (cancer) cells form in the tissues of the lung.

The lungs are a pair of cone-shaped breathing organs that are found in the chest. The lungs bring oxygen into the body when you breathe in and take out carbon dioxide when you breathe out. Each lung has sections called lobes. The left lung has two lobes. The right lung, which is slightly larger, has three. A thin membrane called the pleura surrounds the lungs. Two tubes called bronchi lead from the trachea (windpipe) to the right and left lungs. The bronchi are sometimes also affected by lung cancer. Small tubes called bronchioles and tiny air sacs called alveoli make up the inside of the lungs. 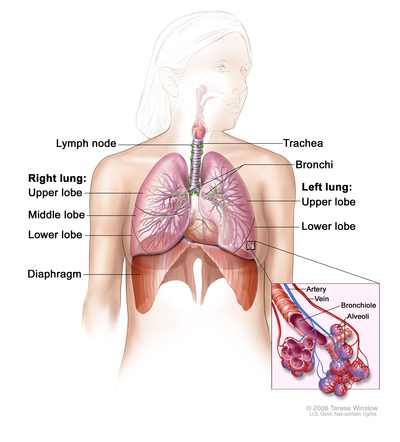 This summary is about small cell lung cancer and its treatment. See the following PDQ summaries for more information about lung cancer:

There are two main types of small cell lung cancer.

These two types include many different types of cells. The cancer cells of each type grow and spread in different ways. The types of small cell lung cancer are named for the kinds of cells found in the cancer and how the cells look when viewed under a microscope:

Risk factors for lung cancer include the following:

Older age is the main risk factor for most cancers. The chance of getting cancer increases as you get older.

When smoking is combined with other risk factors, the risk of lung cancer is increased.

Signs and symptoms of small cell lung cancer include coughing and shortness of breath.

These and other signs and symptoms may be caused by small cell lung cancer or by other conditions. Check with your doctor if you have any of the following:

Tests and procedures that examine the lungs are used to diagnose and stage small cell lung cancer.

For certain patients, prognosis also depends on whether the patient is treated with both chemotherapy and radiation.

For most patients with small cell lung cancer, current treatments do not cure the cancer.

If lung cancer is found, patients should think about taking part in one of the many clinical trials being done to improve treatment. Clinical trials are taking place in most parts of the country for patients with all stages of small cell lung cancer. Information about ongoing clinical trials is available from the NCI website.