Merkel cell carcinoma is a very rare disease in which malignant (cancer) cells form in the skin. 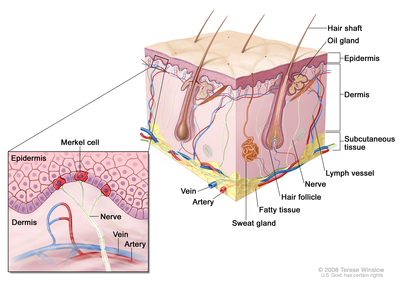 Merkel cell carcinoma tends to grow quickly and to metastasize (spread) at an early stage. It usually spreads first to nearby lymph nodes and then may spread to lymph nodes or skin in distant parts of the body, lungs, brain, bones, or other organs.

Merkel cell carcinoma is the second most common cause of skin cancer death after melanoma.

Sun exposure and having a weak immune system can affect the risk of Merkel cell carcinoma.

This and other changes in the skin may be caused by Merkel cell carcinoma or by other conditions. Check with your doctor if you see changes in your skin.

Merkel cell carcinoma usually appears on sun-exposed skin as a single lump that is:

Tests and procedures that examine the skin are used to diagnose Merkel cell carcinoma.

Prognosis also depends on how deeply the tumor has grown into the skin.