Melanoma is a disease in which malignant (cancer) cells form in melanocytes (cells that color the skin).

The skin is the body’s largest organ. It protects against heat, sunlight, injury, and infection. Skin also helps control body temperature and stores water, fat, and vitamin D. The skin has several layers, but the two main layers are the epidermis (upper or outer layer) and the dermis (lower or inner layer). Skin cancer begins in the epidermis, which is made up of three kinds of cells:

From 2005 to 2018, the number of new cases of melanoma has decreased in people younger than 50 years and stayed about the same in people aged 50 years and older. Melanoma is most common in adults, but it is sometimes found in children and adolescents. For more information, see Childhood Melanoma Treatment. 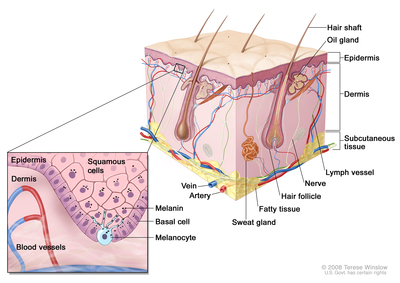 There are different types of cancer that start in the skin.

There are two main forms of skin cancer: melanoma and nonmelanoma.

Melanoma is a rare form of skin cancer. It is more likely to invade nearby tissues and spread to other parts of the body than other types of skin cancer. When melanoma starts in the skin, it is called cutaneous melanoma. Melanoma may also occur in mucous membranes (thin, moist layers of tissue that cover surfaces such as the lips). This PDQ summary is about cutaneous (skin) melanoma and melanoma that affects the mucous membranes.

Melanoma can occur anywhere on the skin.

In men, melanoma is often found on the trunk (the area from the shoulders to the hips) or the head and neck. In women, melanoma forms most often on the arms and legs.

When melanoma occurs in the eye, it is called intraocular or ocular melanoma. For more information, see Intraocular (Uveal) Melanoma Treatment.

Unusual moles, exposure to sunlight, and health history can affect the risk of melanoma.

Risk factors for melanoma include the following:

Being White or having a fair complexion increases the risk of melanoma, but anyone can have melanoma, including people with dark skin.

See the following PDQ summaries for more information on risk factors for melanoma:

Signs of melanoma include a change in the way a mole or pigmented area looks.

These and other signs and symptoms may be caused by melanoma or by other conditions. Check with your doctor if you have any of the following:

For pictures and descriptions of common moles and melanoma, see Common Moles, Dysplastic Nevi, and Risk of Melanoma.

Tests that examine the skin are used to diagnose melanoma.

If a mole or pigmented area of the skin changes or looks abnormal, the following tests and procedures can help find and diagnose melanoma: