Parathyroid cancer is a rare disease in which malignant (cancer) cells form in the tissues of a parathyroid gland. 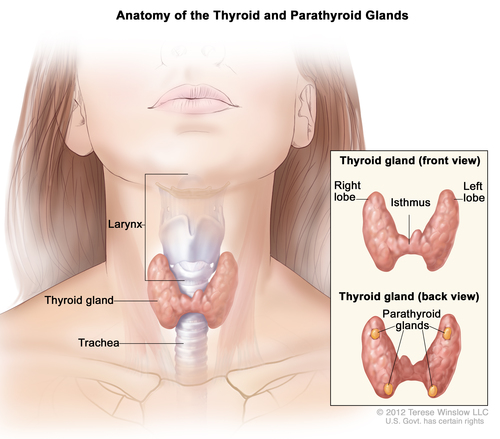 This condition is called hypercalcemia (too much calcium in the blood).

Having certain inherited disorders can increase the risk of developing parathyroid cancer.

Anything that increases the chance of getting a disease is called a risk factor. Risk factors for parathyroid cancer include the following rare disorders that are inherited (passed down from parent to child):

Treatment with radiation therapy may increase the risk of developing a parathyroid adenoma.

Signs and symptoms of parathyroid cancer include weakness, feeling tired, and a lump in the neck.

Other signs and symptoms of parathyroid cancer include the following:

Other conditions may cause the same signs and symptoms as parathyroid cancer. Check with your doctor if you have any of these problems.

Tests that examine the neck and blood are used to detect (find) and diagnose parathyroid cancer.

The prognosis (chance of recovery) and treatment options depend on the following: