Learn about Wilms Tumor and Other Childhood Kidney Tumors

Childhood kidney tumors are diseases in which malignant (cancer) cells form in the tissues of the kidney.

There are two kidneys, one on each side of the spine, above the waist. Tiny tubules in the kidneys filter and clean the blood. They take out waste products and make urine. The urine passes from each kidney through a long tube called a ureter into the bladder. The bladder holds the urine until it passes through the urethra and leaves the body. 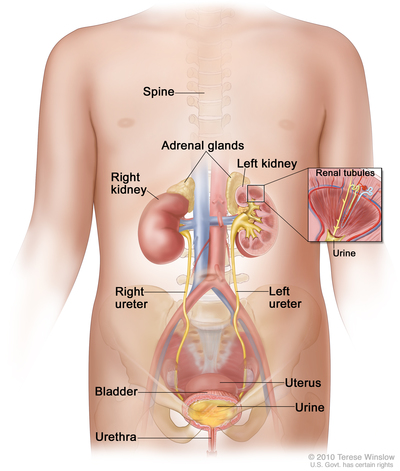 There are many types of childhood kidney tumors.

In Wilms tumor, one or more tumors may be found in one or both kidneys. Wilms tumor may spread to the lungs, liver, bone, brain, or nearby lymph nodes. In children and adolescents younger than 15 years old, most kidney cancers are Wilms tumors.

Rhabdoid Tumor of the Kidney

Children with a certain change in the SMARCB1 gene can also have tumors grow in the kidney, brain, or soft tissues. These children are checked regularly to see if a rhabdoid tumor has formed in the kidney or the brain:

Clear Cell Sarcoma of the Kidney

Clear cell sarcoma of the kidney is an uncommon kidney cancer that may spread to the bone, lungs, brain, liver, or soft tissue. It occurs most often before age 3 years. It may recur (come back) up to 14 years after treatment, often in the brain or lung.

Congenital mesoblastic nephroma is a tumor of the kidney that is often diagnosed during the first year of life or before birth. It is the most common kidney tumor found in infants younger than 6 months old and is found more often in males than in females. It can usually be cured.

Ewing Sarcoma of the Kidney

Ewing sarcoma (previously called neuroepithelial tumor) of the kidney is rare and usually occurs in young adults. This cancer grows and spreads to other parts of the body quickly.

Primary renal myoepithelial carcinoma is a rare type of cancer that usually affects soft tissues, but sometimes forms in the internal organs (such as the kidney). This type of cancer grows and spreads quickly.

Cystic partially differentiated nephroblastoma is a very rare type of Wilms tumor made up of cysts.

Multilocular cystic nephromas are benign tumors made up of cysts and are most common in infants, young children, and adult women. These tumors can occur in one or both kidneys.

Children with this type of tumor also may have pleuropulmonary blastoma, so imaging tests that check the lungs for cysts or solid tumors are done. Since multilocular cystic nephroma may be an inherited condition, genetic counseling and genetic testing may be considered. See the PDQ summary about Childhood Pleuropulmonary Blastoma Treatment for more information.

Primary renal synovial sarcoma is a cyst-like tumor of the kidney and is most common in young adults. These tumors grow and spread quickly.

Anaplastic Sarcoma of the Kidney

Nephroblastomatosis is not cancer but may become Wilms tumor.

Sometimes, after the kidneys form in the fetus, abnormal groups of kidney cells remain in one or both kidneys. In nephroblastomatosis (diffuse hyperplastic perilobar nephroblastomatosis), these abnormal groups of cells may grow in many places inside the kidney or make a thick layer around the kidney. When these groups of abnormal cells are found in a kidney after it was removed for Wilms tumor, the child has an increased risk of Wilms tumor in the other kidney. Frequent follow-up testing is important at least every 3 months, for at least 7 years after the child is diagnosed or treated.

Having certain genetic syndromes, other conditions, or environmental exposures can increase the risk of Wilms tumor.

Wilms tumor may be part of a genetic syndrome that affects growth or development. A genetic syndrome is a set of signs and symptoms or conditions that occur together and is caused by certain changes in the genes. Certain conditions or environmental exposures can also increase a child's risk of developing Wilms tumor. The following have been linked to Wilms tumor:

Tests are used to screen for Wilms tumor.

Screening tests are done in children with an increased risk of Wilms tumor. These tests may help find cancer early and decrease the chance of dying from cancer.

In general, children with an increased risk of Wilms tumor should be screened for Wilms tumor every 3 months until they are at least 8 years old. An ultrasound test of the abdomen is usually used for screening. Small Wilms tumors may be found and removed before symptoms occur.

Children with Beckwith-Wiedemann syndrome or hemihyperplasia are also screened for liver and adrenal tumors that are linked to these genetic syndromes. A test to check the alpha-fetoprotein (AFP) level in the blood and an ultrasound of the abdomen are done until the child is 4 years old. An ultrasound of the kidneys is done between the ages of 4 and 7 years old. A physical exam by a specialist (geneticist or pediatric oncologist) is done two times each year. In children with certain gene changes, a different schedule for ultrasound of the abdomen may be used.

Children with aniridia and a certain gene change are screened for Wilms tumor every 3 months until they are 8 years old. An ultrasound test of the abdomen is used for screening.

Having certain conditions may increase the risk of renal cell cancer.

Renal cell cancer may be related to the following conditions:

Prior chemotherapy or radiation therapy for a childhood cancer, such as neuroblastoma, soft tissue sarcoma, leukemia, or Wilms tumor may also increase the risk of renal cell cancer. See the Second Cancers section in the PDQ summary about Late Effects of Treatment for Childhood Cancer for more information.

Treatment for Wilms tumor and other childhood kidney tumors may include genetic counseling.

Genetic counseling (a discussion with a trained professional about genetic diseases and whether genetic testing is needed) may be done if the child has one of the following syndromes or conditions:

Signs of Wilms tumor and other childhood kidney tumors include a lump in the abdomen and blood in the urine.

Wilms tumor that has spread to the lungs or liver may cause the following signs and symptoms:

Tests that examine the kidney and the blood are used to diagnose Wilms tumor and other childhood kidney tumors.

The prognosis and treatment options for Wilms tumor depend on the following:

The prognosis for renal cell cancer depends on the following:

The prognosis for rhabdoid tumor of the kidney depends on the following:

The prognosis for clear cell sarcoma of the kidney depends on the following: