Pancreatic cancer is a disease in which malignant (cancer) cells form in the tissues of the pancreas. 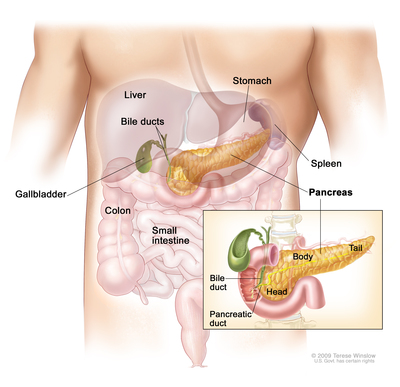 The pancreas has two main jobs in the body:

For information on pancreatic cancer in children, see the PDQ summary on Childhood Pancreatic Cancer Treatment.

Smoking and health history can affect the risk of pancreatic cancer.

Risk factors for pancreatic cancer include the following:

Signs and symptoms of pancreatic cancer include jaundice, pain, and weight loss.

Pancreatic cancer may not cause early signs or symptoms. Signs and symptoms may be caused by pancreatic cancer or by other conditions. Check with your doctor if you have any of the following:

Pancreatic cancer is difficult to detect and diagnose for the following reasons:

Tests that examine the pancreas are used to diagnose and stage pancreatic cancer.

Pancreatic cancer can be controlled only if it is found before it has spread, when it can be completely removed by surgery. If the cancer has spread, palliative treatment can improve the patient's quality of life by controlling the symptoms and complications of this disease.